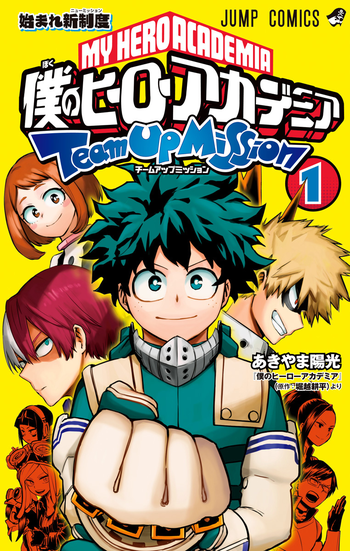 Who will be teaming up next?
Advertisement:

Japan has received one shakeup after another since Izuku Midoriya began attending U.A. High. All Might, the Number One Hero, has been forced to retire after his final battle with his archenemy, All For One. Without the Symbol of Peace, villains from long past have started crawling out of the woodwork, and Japan's heroes have been struggling to pick up the slack. To address this, the Public Safety Commission has started training prospective heroes to work in teams to lessen the need for a singular symbol to carry the hopes of society.

To facilitate this and give the students some much needed field experience, the Team Up Mission system was founded. It gives a team of students a one-time team-up with a pro hero in hopes of fostering communication and teamwork among them, even with heroes they don't know. Who will be placed on a team? Which heroes will 1-A learn from? U.A.'s heroes in training eagerly open their invitations to start their latest Team Up Missions!

My Hero Academia: Team Up Mission is a bi-monthly Spin-Off of Kohei Horikoshi's My Hero Academia written and illustrated by Yoko Akiyama, her second series after My Heroine Academia. It follows an episodic format that gives U.A.'s hero students a chance to team up with and learn from a pro hero with every installment.

Since this takes place at an unspecified time after the Culture Festival arc, all spoilers up to then will be unmarked. You Have Been Warned.

My Hero Academia: Team Up Mission contains examples of: