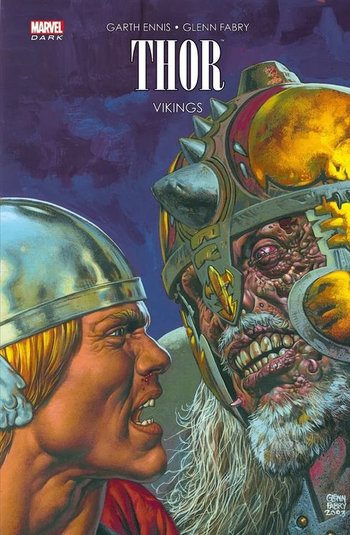 What happens when The Mighty Thor gets the Garth Ennis' treatment? You get Thor: Vikings, a 2003 limited miniseries written by Garth Ennis, illustrated by Glenn Fabry and published under Marvel MAX, the R-rated imprint of Marvel Comics.

In the year 1003, Harald Jaekelsson and his crew of Norse raiders are cursed by a wise man for destroying his village and murdering its townsfolk. They set sail west towards the New World for a thousand years until they reach New York and do what Norse raiders were pretty infamous for doing. The God of Thunder attempts to stop them, but shockingly, he gets trounced by Jaekelsson who proceeds to slaughter everything on his path. In order to stop these immortal zombies, Thor enlists the help of Doctor Strange, who summons a trio of warriors from different time periods descended from the wise man who have the power to kill these monsters.

Unlike other prominent titles of the brand, this miniseries takes place in the mainstream Marvel continuity instead of its own stand-alone universe. However, its canonical status within said continuity is ambiguous.

This comic has the following examples: