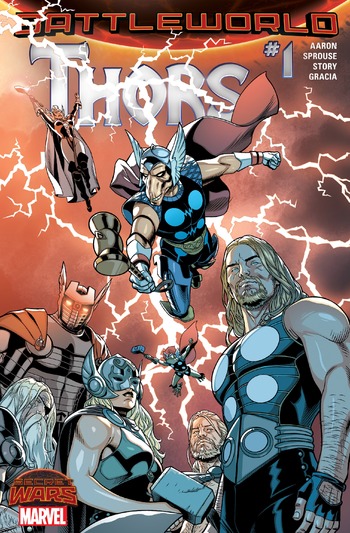 Thors is a 2015 limited series by Jason Aaron and Chris Sprouse, set during the Secret Wars. In this realm, Thor is not a single hero, there is a whole army of Thors that work as Dr. Dooms police.

The lead character is Ultimate Thor (from The Ultimates), who has an open case: all the Jane Fosters of the many realms are being killed. His partner Beta Ray Thor (Beta Ray Bill) is killed during the investigation. Eventually, the killer is found and captured. Just in time for the 616 Jane Foster to show up, and convince the Thors to raise against Doom at the crossover finale.