Theatre / Arms and the Man 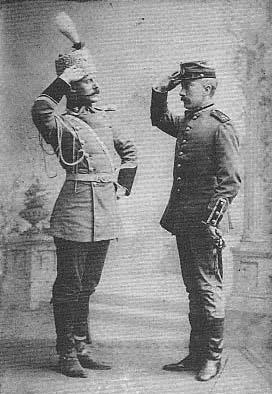 Arms and the Man is a comedic play first performed in 1894, written by George Bernard Shaw.

It tells the tale of a young Bulgarian lady named Raina Petkoff, whose fiance is an officer in the Serbo-Bulgarian War. One night, a Swiss officer working for the Serbs takes refuge from the battle in her bedroom. Hilarity Ensues. And that's just the first act. Things get even crazier when, after the war, Raina's fiance Sergius returns from the war and begins a kinda-sorta love affair with her maid, Louka, and Captain Bluntschli returns in peacetime, welcomed as an honored guest by Raina's father, even though he has no idea the two already know each other.

Actors who have appeared in productions include Laurence Olivier in 1944 (as Sergius) and Marlon Brando in his last stage production (also as Sergius). It has received several screen adaptations, including a 1989 BBC television version with Helena Bonham Carter as Rania and a 1958 German film, Arms and the Man.