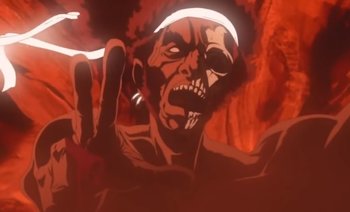 You can never escape the Cycle of Blood!
Despite it's action-packed awesome moments, the story of Afro Samurai is a blood-curdling tale of horrendous death all for the sake of revenge and power. Even worse, it's implied it will never really end as long as the Headbands exist.
Advertisement: