The cast of characters for Afro Samurai. 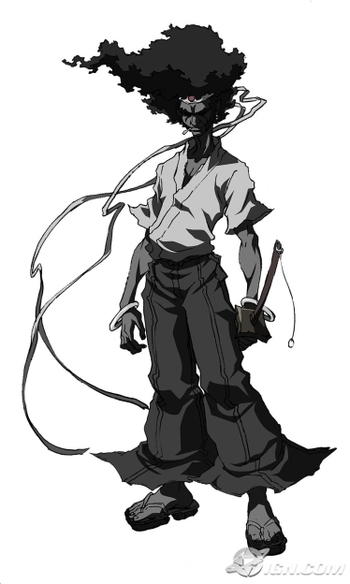 "Nothing personal. It's just revenge."
Voiced by: Samuel L. Jackson

The protagonist, hell-bent on revenge for his father, who was killed by Justice before his very eyes.

Appears in: All Versions (Naturally). 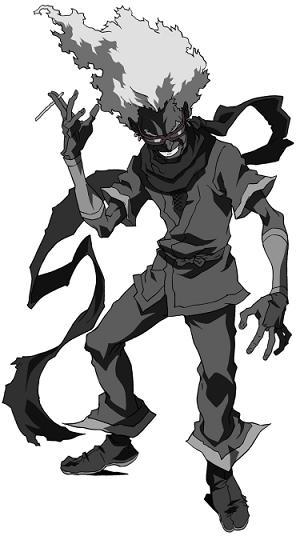 "If you don't stop dissin' me, I'm gonna stop following your brutal ass around."
Voiced by: Samuel L. Jackson

Apparently Afro's only friend, he follows Afro on his quest for revenge. He seems to disappear before every fight or is seen as a spectator commenting on the battles. It's heavily implied, if not outright said that he is the personification of what's left of Afro's humanity. 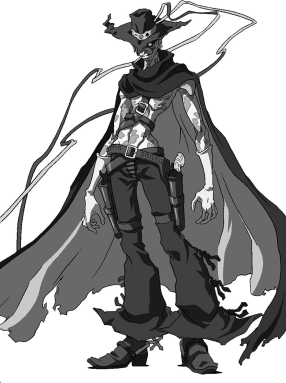 "With this band, across my forehead... I will rule this world, as God himself."
Voiced by: Ron Perlman

A gunslinger who before the series began became the Number Two, he becomes the Number One when he kills Afro's father, setting the plot in motion.

"My dream is to fulfill the dreams of my father, to become a master swordsman and open up a dojo."
Voiced by: Yuri Lowenthal

Afro's childhood friend and rival at the dojo, he thinks of Afro like his brother. When The Number Two Headband is tracked to the dojo, Jinno is nearly killed, but survives and is transformed by Dharman into Kuma.

Teddy-bear mask-wearing cyborg, created by Dharman. He waits on Mt. Shumi (Sumeru in the Manga), guarding the path to Justice.

He eventually reveals himself to be Jinno, rebuilt after he was nearly killed.

In Resurrection, he returns, serving Sio in her plot to revive Afro's Father, his personality almost entirely gone due to the constant repairs to his cybernetic body.

"Dear brothers, it seems that our long-awaited day has arrived! Our prayers, like paved stones, have led us to the door of the Number One!"
Voiced by: Phil LaMarr (Brothers 1, 3 and 5), John DiMaggio (Brother 2), Terrence C. Carson (Brother 4) and Greg Eagles (Brother 6)

The leaders of a cult that worships the power of the headbands, and seek to gain control of the Number One in order to become gods. To do this, they must kill Afro, to which end they hire assassins from all over the world, and build various cyborg warriors when those assassins prove inadequate.

Appear In: All Versions. 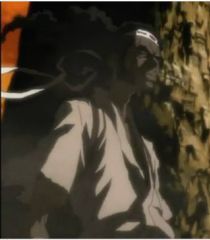 Father of the protagonist, and bearer of the Number 1 Headband. Killed by Justice in order to claim said headband. Resurrected by Sio in Resurrection.

"We are born men in order to live, not to kill."
Voiced by: Terrence C. Carson

An old warrior who owns a small dojo, where he trains orphans in the art of the sword. He finds Afro after his father's death and he takes him in, attempting to sway him from the path of revenge. Eventually, Afro discovers that he has become the Number Two, and he challenges him for the headband.

"Lenamode?"
"When things get hard, look at this comb and think of Master and the rest of us, and of this mountain."
Voiced by: Tara Strong

One of the orphans adopted by the Sword Master, she acts as the heart of the family, and always carries around a teddy bear.

Only appears as a child in the anime and game sort of, but in the manga, she grows up alongside the rest of Afro's True Companions, even developing a romance with him.

"Will you stay and watch the fireworks with me?"
Voiced by: Kelly Hu

A village healer who find Afro after his battle with Brother 6. She nurses him back to health, but at the same time probes his dreams to extract his skills for use in the Empty 7's Afro Droid. She eventually receives orders to kill him, but can't bring herself to go through with it, and is killed for her betrayal.

She is revealed in the Anime to have been Otsuru, having survived the massacre at the sword dojo. Curiously, no mention of her past identity of Otsuru is made by her in the game, which is odd, as she narrates her own chapter.

A young woman who found Afro after his slaughter of the Empty 7 and subsequent asskicking at the hands of Kuma. She belongs to an isolated community that follows the teachings of "The One". As she cares for Afro, she seems to develop an attraction to him, and it appears that Afro might reciprocate. Unfortunately, it turns out that "The One" would probably be more accurately referred to as "Number One". When she learns that Afro cannot forgive Justice, and intends to kill him despite all the good he's done, she attempts to kill Afro first. This leads to Afro slaughtering the entire community.

Advertisement:
Sasuke, Jiro, and Matasaburo (and the rest of the Sword Master's Students)

The students at the Sword Master's dojo, they collectively help to try and bring Afro out of his shell.

And then they all die in the battle beneath the Bodhi Tree.

"I welcome you wholeheartedly and will gladly teach [drowned out by Big Boy] within my know-[drowned out again] you sho-[interrupted once more.]"

The youngest of the orphans adopted by Sword Master until Afro comes along. Talks a lot.

The last of the orphans adopted by the Sword Master, his defining trait is his lack of indoor voice.

"Nothing is mightier than the fundamental laws by which all things in this world operate."
Voiced by: Phil LaMarr (S. Scott Bullock in the Director's Cut)

A mad scientist in the employ of Justice (in the manga) and the Empty 7 (in the anime). He was responsible for Jinno's conversion into Kuma, and was the creator Afro Droid.

In Resurrection, Sio hires him to perform the revival of Afro's father. After she interrupts the process, she kills him.

A Terminator-esque robot built in Afro's likeness (or in the manga, his father's), complete with a false skin covering. It is meant purely for battle, and it does it well, utilizing Afro's moves with a 20% increase in physical strength.

"There's no place in this world for dangerous men like us, don't you think?"
Voiced by: Liam O'Brien

A fisherman that Afro comes across in his travels, along with his son Kotaro. The two end up in a duel, though the reasons why differ greatly between Resurrection and the manga:

In the manga, Shichigoro and Oi-chan are former assassins for the Empty 7. After Oi-chan botched a job, Shichigoro betrayed the clan, protecting the old man from the Empty 7's cleaners, and the two, along with Kotaro, began traveling the province with a hotpot stand, trying to stay under the 7's radar. When Shichigoro realizes who Afro is, he challenges him in the hope that presenting his head to the Empty 7 will settle his debt, making the world safe for Kotaro.

In Resurrection, he is in fact the new Number Two, but chooses to hide the headband, hoping that by hiding it, humanity will forget about the headbands and their so-called power. He meets Afro when Afro cuts down the man trying to kidnap his Kotaro, and recognizes him as the former Number Two. He reveals to Afro that Kotaro is in fact his adopted son, and that the boy's father was one of the many warriors who died seeking the Number Two headband. Shichigoro promised his dying friend that he would end the wars over the headbands.

Shichigoro's young son (adopted in Resurrection). He watches Afro kill his father in a duel, mirroring how Afro saw his own father slain by Justice.

"We took countless lives. Just like you."
Voiced by: Mark Hamill

"Humans cannot survive without a god to control them. That's the truth of things."
Voiced by: Kevin Michael Richardson

A mysterious watcher who serves the Number One, working to kill the Number Two.

In the manga he works as Justice's eyes and ears out in the world or presumably did before Justice died.

In Resurrection, he only appears at the very end in the old Mt. Shumi sanctuary, welcoming back Justice.

Above all else, he believes in the power of Number One to free the world from chaos and pain.

Appears in: Resurrection, and Manga.

"Even the great No. 2 can't do nothin' besides run off and hide at the site of my great, big cannon!"

A warlord contacted by the Empty 7, Gorokube engages Afro in battle at the parade, wielding an RPG and a minigun. In exchange for his help acquiring the Number Two headband, he demands all of the Empty 7's wealth. His arsenal gives Afro a bit of trouble, but Afro bests his assassins and the man himself through a horizon-crossing use of human shields.

"You're chasing a lie. There are no 'sacred' headbands; there are no gods keeping us in check. There is only man."
Voiced by: William Morgan Sheppard

The lord of the province in which the Sword Dojo resides, and Sword Master's elder brother. He was present when Afro was first found by the Sword Master. Afro raids his castle seeking The Number Two headband, eventually facing the Daimyo in combat. 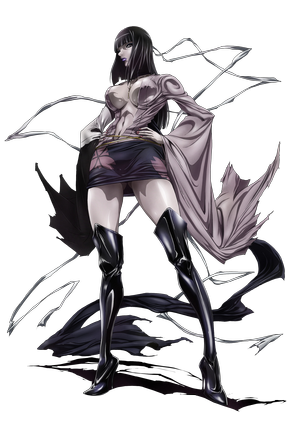 "Do you remember me? I remember you. And all that you've done. How many hundreds of lives have you ended? How many thousands have you made mourn the loss of their loved ones?"
Voiced by: Lucy Liu

Kuma's long lost sister, who was apparently adopted by a rich family while he studied swordplay. She kicks off the plot of Resurrection by breaking into Afro's home and stealing the Number One headband. She also plans to revive Afro's Father and torture him in retaliation for what Afro did to Kuma.

"We must not allow our Lady Sio to tread the path of darkness, such a sweet lady she is. We will not allow her to fall from grace. Instead, we will be the sinners..."
Voiced by: Mark Hamill, none and Grey DeLisle

Sio's "vassals", who helped raise her in the rich household she was adopted by. When their town is destroyed, they are revived by Dharman, and continue to serve Sio, aiding her in her revenge. Secretly, they plan to kill Afro before her plans come to fruition to keep her from becoming a murderer.