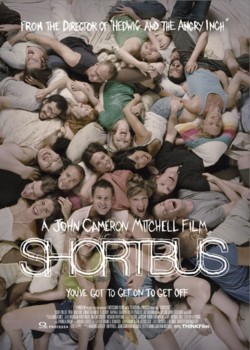 Shortbus is a 2006 film made by John Cameron Mitchell, the guy behind Hedwig and the Angry Inch. It is known primarily for its scenes of unsimulated sex.

The second revolves around James, an amateur filmmaker and former hustler who is morose and introverted. He and his boyfriend, Jamie, begin an open relationship with a third man, while a fourth, named Caleb, stalks James from his apartment one block over. The film James has been working on turns out to have an unpleasant surprise.

While Shortbus has largely been overshadowed by Hedwig, it remains a quirky and off-beat flick with its own merits. If nothing else, it has lots and lots of sex in it.