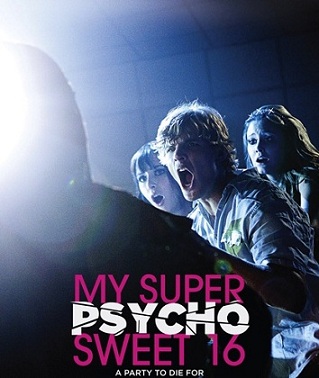 It's my party and you'll die If I want you to!
"She always gets what she wants. Now give her what she deserves."
Advertisement:

My Super Psycho Sweet 16 is a 2009 Slasher Movie made by MTV as a spinoff of their reality show My Super Sweet Sixteen, its purpose being to allow viewers to witness what they all wish would happen to the brats from that show.

Ten years ago, Charlie Rotter, an employee at the Roller Dome who played the goofy "Lord of the Rink" for birthday parties, moonlighted as a Serial Killer, murdering six teens who had sneaked into the rink at various points before being busted by his young daughter Skye. The rink was shut down in the wake of the murders, Charlie died (or did he?) when his prison bus crashed, and Skye was sent to live with her aunt Sarah. Now, 15-year-old Spoiled Brat Madison Penrose is reopening the Roller Dome in order to hold her 16th birthday party there, a party which Skye plans to crash with her friend Derek in order to meet a cute football player named Brigg and to spite Madison. But they're not the only uninvited guests at Madison's super sweet 16...