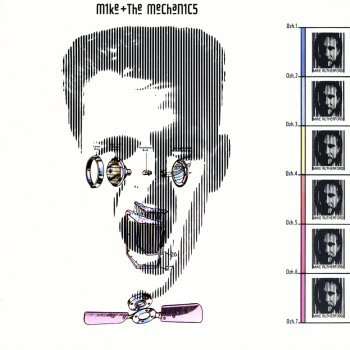 And though I treated you like a child
I'm gonna miss you for the rest of my life
—"All I Need is a Miracle"
Advertisement:

Mike + The Mechanics is the self-titled debut album of pop rock supergroup of the same name. It was released through Atlantic Records on 5 October 1985.

When he sought to begin his second foray into a solo career, Genesis guitarist Mike Rutherford connected with producer Christopher Neil, and played several samples of demos that were in varying stages of completion. Neil helped him turn the segments he felt were worth developing into full songs.

The only song that was not co-developed in this manner was "Silent Running (On Dangerous Ground)", which was co-written with Scottish singer BA Robertson. Another song, "A Call to Arms", while based on a song that was left unused by Genesis, was largely developed by Rutherford, Robertson, and Neil—though Genesis bandmates Phil Collins and Tony Banks would also get writing credit.

The album was effective in giving Rutherford his own voice in music, even if he wasn't the one doing the lead vocals. Retrospectively, Allmusic would conclude that while the next album, Living Years, was more successful commercially, this work featured a more complete sound, and they lauded all members of the band for their strong musical performances. It would ultimately go Gold in the United States.

In addition, "Par Avion" would be used in an episode of Miami Vice, along with the 1987 John Ritter film The Last Fling.

"Caught up in the tropes, left out in the end"