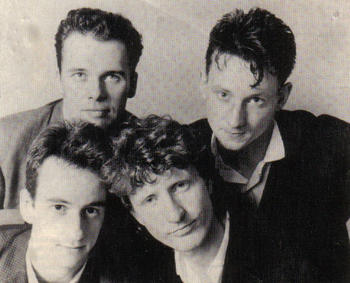 Microdisney were a New Wave band from Cork, Ireland. They relocated to London, England early in their career.

They were composed of singer/keyboardist Cathal Coughlan and guitarist Sean O' Hagan, with backing musicians varying by album. A duo for their first few singles and album, they formed a five piece band for the rest of their career. An early incarnation of Microdisney was known as Constant Reminders and Micro-Disney respectively, one incarnation featuring future Stump singer Mick Lynch on vocals.

Existing from 1980-1988 they were basically rooted in New Wave but had a unique approach - accessible and often beautiful melodies with cynical and despairing lyrics. They broke up in 1988 due to a combination of factors: their record company dropped them due to their last album being a flop, they had run out of ideas for potential singles, and the main band members began to differ musically.

The band members went on to more famous things: Cathal in The Fatima Mansions and Sean (and most of Microdisney's backing band) in The High Llamas.