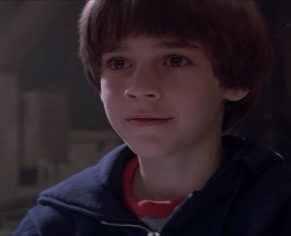 The Hero and Audience Surrogate, Bastian borrows the Neverending Story from Mr. Coreander and discovers its wonders and how it is actually a real Magical Land, learning of his required involvement to keep it alive. 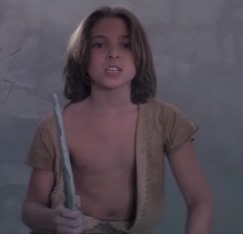 A skilled huntsman from the Greenskins of the Grassy Ocean, Atreyu is selected by the Childlike Empress to go on a quest to find a cure to her illness and save Fantastica from the Nothing. Atreyu acts as The Hero, shared with Bastian and becomes the Supporting Protagonist in the second half of the book.

The God Empress of Fantastica, the Childlike Empress never ages and can only be met once in a person's lifetime. She becomes deathly ill during the novel, sending Atreyu on a quest to find a cure and a way to stop the Nothing. However, the quest is a Batman Gambit to get Bastian to Fantastica so that he can cure her and their world by giving her a new name.

A mysterious but Magic Librarian (actually a bookstore owner), in whose store the titular book appears. He once went to Fantastica himself.

A luckdragon who befriends Atreyu. He is very courageous and upbeat, believing luck is a wonderful thing. As a Giant Flyer, he spends most of his time flying. He is a shining white Eastern-type dragon with leonine features.

A rock chewer, although known in the film as the Rockbiter, Pyornkrachzark is one of the travelling companions on their way to visit the Childlike Empress for help against the Nothing. A giant man made of rock, Pyornkrachzark enjoys eating rocks and rides on a large stone bike.

The Big Bad of the first half of the book, the Nothing uses The Power of the Void to erase Fantastica from existence. Created from the forgotten hopes and dreams of mankind, the Nothing is used by the unseen Manipulators to destroy human imagination so that humanity will be more controllable. 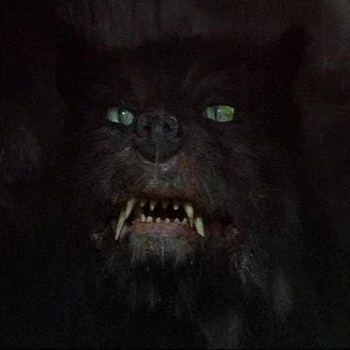 The Dragon to the Nothing, Gmork aids the destroyer of worlds to prevent Atreyu from finding a way to defeat it. A servant of the Manipulators, Gmork appears as a wolf and relentlessly hunts Atreyu through the book and film.

Gmork's employers. Mysterious beings who wish to use the Nothing to turn Fantasticans into delusions and lies, wherein they will be set loose in the human world, driving humanity further wayward.

An evil sorceress who serves as a villain in the second half of the novel, while pretending to be Bastian's humble servant after he defeats her on her home turf. She manipulates Bastian to siege the Ivory Tower, planning to use him to take over Fantastica. She dwells in the hand-shaped castle Horok, and controls an army of empty iron minions.

A group of Fantasticans who are travelling together to the Ivory Tower as messengers from their far-flung regions of Fantastica to ask the Childlike Empress for help with the Nothing, only to learn she herself has fallen ill. They consist of Pyornkrachzark the rock chewer on his stone bike, the Will-o'-Wisp Blubb, the night hob Vooshvazool (and his stupid bat), and the tiny man Gluckuk with his racing snail.

A black zebra-centaur who is the last and greatest of the five hundred doctors summoned to examine the Childlike Empress. She gives him AURYN and sends him to find Atreyu and put him on his quest.

Morla the Ancient One

The oldest being in Fantastica, discounting the Childlike Empress and the Old Man of Wandering Mountain, who are ageless. Morla is a tortoise of fantastic size, who has been inert in the Swamps of Sadness for so long that she has become a landmark, Tortoise Shell Mountain.

A feared and powerful monster that lives in the deep chasm.

The Gnomics. Engywook is a gnome scientist who lives near and studies the Southern Oracle, and Urgl, a gnome healer, is his wife.

A legendary being known to be able to answer nearly any question, but can only be met by those who can pass three magic gates to reach her.

The Old Man of Wandering Mountain

An ancient being of the same kind as the Childlike Empress. While she will never be old, he was never young. The Old Man of Wandering Mountain writes the Neverending Story, recording every event that has ever happened into the book, in absolute solitude.

Grograman the Many Coloured Death

The Many-Colored Death, Lord of the Desert of Colors, and the deadliest creature in Fantastica. He is a lion whose fiery aura makes everything around him into Goab, the Desert of Colors. He turns to stone at night, and the sands of Goab grow into Perilin, the Night Forest, until he awakens again in the morning. Bastian is one of the few beings who can be around him and live, thanks to the protection of AURYN.

The Four Heroes and Princess Oglamar

A group of travelers that Bastian meets shortly after arriving in Fantastica. Hero Hynreck is a knight determined to be the greatest and impress Oglamar, the Princess of Luna, who is only interested in the very best of heroes. Hykrion, Hysbald, and Hydorn are wandering knights looking to prove themselves as the strongest, swiftest, and most enduring of all knights, respectively, who met up with Hynreck and Oglamar by chance and became his friends.

An elderly, talking mule in service to Hykrion, Hysbald, and Hydorn, who later becomes Bastian's mount.

The saddest, ugliest, and most depressed creatures in existence, who fashion the indestructible silver that composes the City of Amarganth and weep endlessly. Later, they are transformed by Bastian into their polar opposites, the Shlamoofs, a race of clowns and everlasting laughers.

Former human saviors of Fantastica who never made it out to the real world. They inhabit the City of Old Emperors, and are looked after by Argax the monkey.

A talking monkey who looks over the inhabitants of the City of Old Emperors.

The prince of the djinn, who seeks out Bastian and becomes one of his most trusted administrators.

An immortal plant woman who lives in the House of Change, repeatedly dying and being reborn. Her desire and purpose is to have a child to love.

The blind miner, who spends his days going deep underneath Fantastica to harvest the forgotten dreams of humanity from the Picture Mine.

Bastian's father, a dentist, who became depressed and distant from his son after the death of his wife, Bastian's mother.