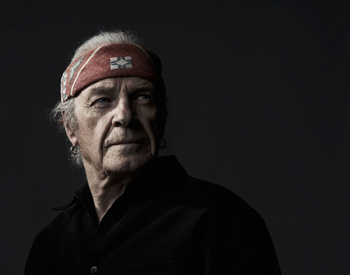 Donald Harvey Francks (February 28, 1932- April 3, 2016) also known by his stage name of Iron Buffalo, was a Canadian actor, musician, and singer. Born in Vancouver, British Columbia, he is considered one of the greats of the Canadian entertainment industry, having around 200 acting credits to his name and a wide variety of talents and accomplishments, including drummer, poet, motorcyclist, author, peace activist, vocalist and jazz musician.

While he had performed in vaudeville and radio as a teenager, Don Francks began his TV career in the 1950s with a recurring role in the 1955 CBC series Burns Chuckwagon from the Stampede Corral, but earned his first lead gig in 1959 with another CBC program called R.C.M.P., where he played Constable Bill Mitchell. he would continue to appear on both American and Canadian television throughout the 1960s in both major and minor roles, including appearances in such classic shows as Jericho (1966) (in which he was one of the three leads), Mission: Impossible, The Man from U.N.C.L.E., The Wild Wild West, and Mannix. He also starred in the 1968 Hollywood adaptation of the play Finian's Rainbow by Francis Ford Coppola. He would continue to act for the next few decades, including as the narrator of the CBC's 1970 documentary series This Land (where he also portrayed the famous writer and conservationist Archibald "Grey Owl" Belaney), Walter on La Femme Nikita, appearances on movies like I'm Not There, My Bloody Valentine, and Johnny Mnemonic, and quite a few voiceover roles in animated works like X-Men: The Animated Series and Rock and Rule. He was even the first person to portray Star Wars's famous bounty hunter Boba Fett, providing the voice of the character in his debut in the animated segment of The Star Wars Holiday Specialnote but because the film itself does not list Boba's VA, some sources differ and claim it was Gabriel Dell who voiced the bounty hunter.

Outside of film and television, Don Francks enjoyed an extensive career in music. Able to play trombone, drums, and flute, he frequently performed in Jazz nightclubs across Canada and the United States and led his own avant-garde Jazz band called Three, which he established in 1962. His band was even featured in a documentary by the National Film Board of Canada called Toronto Jazz! Don Francks has also released several albums, with his 1965 album Lost... and Alone becoming the #4 bestseller in Canada in 1965.

Don Francks was originally married in 1962 to Nancy Sue Johnson and had two children with her, but they divorced in 1967. He then married the Cree/Afro-Canadian dancer and actress Lili "Red Eagle" Clark in 1968. He had three children with Lili, who are the prominent voice actress Cree Summer, actor/songwriter Rainbow Sun Francks, and the late Bentley Francks-Slaughter (who died in 2008 in a house fire). Due to his marriage, Don Francks was considered an honorary member of the Red Pheasant Cree Nation, and he got his nickname of "Iron Buffalo" while living on a reserve with Lili during the late 60s and early 70s. As a result, he became an avid champion for First Nations peoples across Canada, and was also known for his advocacy of legalizing marijuana and protecting the environment.

Don Francks died in 2016 in Toronto from cancer at age 84, bring his mighty 60+ year career to an end. His final role of significance was Lizard in The History Channel's factual-based drama series Gangland Undercover. He is succeeded by his wife and children, who are all still active and working in film, television, and music.