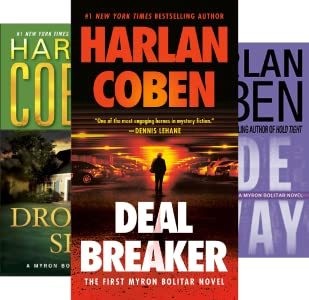 Written by Harlan Coben, the Myron Bolitar series, tells the story of Myron Bolitar a former Basketball player/FBI... something who now works as as a sports agent for his own company, MB Sports Rep. Thing is he has a knack for picking up clients that get themselves into some serious trouble, and he usually ends playing P.I. for his clients. Luckily he has that Harvard law degree, numerous contacts, and a third-degree black belt in Tae Kwon Do to help him out.

Other characters include his best friend Windsor "Win" Horne Lockwood III. He is seriously old money, and fits the prep stereotype to a tee. But don't let appearances fool you, he's a highly trained martial artist and never leaves home without at least three weapons on hand. usually also gives him a hand. Win's moral code tends to be black and white, and he has no qualms about taking out the black. Or anyone who hurts Myron. You really don't want to hurt Myron around Win.

There is also Myron's other best friend Esperanza Diaz, a former pro-wrestler turned law student/master assistant. She is as badass as she sounds, and its likely that without her their business would have collapsed a long time ago. Other characters that pop up include Myron's parents (he still lives with them a good deal of the time, despite being in his thirties) and Jessica Culver, Myron's on and off again girlfriend.

The series is full of sarcastic and snappy dialogue, colorful characters, and frequent squick with the descriptions of the murders and sex. The series is over the top and ridiculously fun, though it does have its serious moments. Expect mood whiplash while reading.

So far there are ten books in the series:

There has been talk of making a film/TV series version of the Myron Bolitar series for years, but so far nothing has come of it.