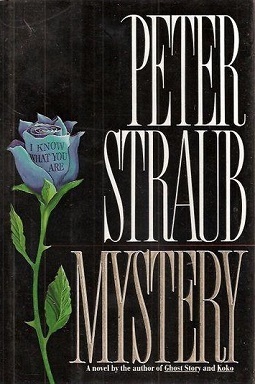 Mystery is a 1990 thriller novel by Peter Straub, the second of his loosely-connected “Blue Rose” trilogy.

It’s the late 1950’s and Mill Walk is a Caribbean island known only to its locals and a community of rich German and American expatriates. A boy named Tom Pasmore has landed in the hospital after a car accident nearly kills him. While recuperating, Tom starts a friendship with Lamont von Heilitz: an ostracized, reclusive old man who lives across the street. As the 60’s dawn and Tom heals into his teenage years, he becomes deeply invested in a past string of local murders. Von Heilitz approaches the boy with a deep secret.

In his prime, Lamont von Heilitz was “The Shadow”, the world’s best private eye. He regales Tom with tales and newspaper headlines of his past cases. The two bond over the one case gone unsolved: the mid-1920’s disappearance of an heiress in the resort town of Eagle Lake, Wisconsin.

Now on the cusp of adulthood and a life of privilege, Tom finds his inner sleuth and aims to unearth the dirty truths of Mill Walk and Eagle Lake with his friends Sarah Spence and Fritz Redwing.