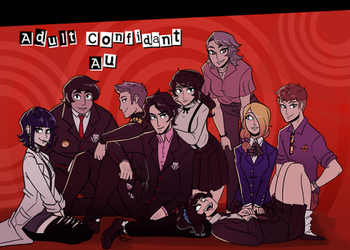 In another world… another time… the players come together as the game is set in motion…note From left to right: Tae Takemi, Toranosuke Yoshida, Munehisa Iwai, Sojiro Sakura, Sadayo Kawakami, Sae Niijima, Chihaya Mifune, Ichiko Ohya, Masayoshi Shido.
"Nothing can stop us now."
Advertisement:

, the Adult Confidant AU revolves around the core concept of swapping around the ages of the core cast and adult confidants of Persona 5, and turning the largely passive supporting cast into the protagonists of the story.

Starting out as a couple of concepts of Sojiro and Futaba Sakura with their ages and positions reversed, the concept got a lot of positive attention from the fandom and quickly grew into a more fully realized concept, with Scruffy himself admitting that he plans to make it into a full-fledged webcomic. It was eventually released in comic form on February 27th 2020 via Webtoons, which you can view here.