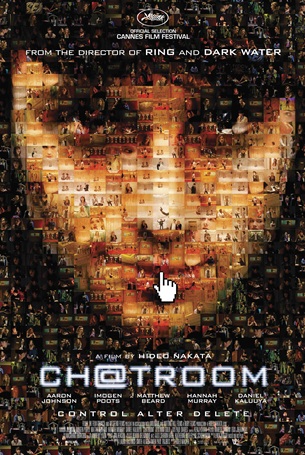 A 2010 film directed by Hideo Nakata, the same guy who made The Ring and Dark Water.

Five teenagers meet online and become friends. However, several of them have mental problems... and mixing these people with each other is like mixing nitro and glycerine...

Most of the story takes place in a metaphorical cyberspace: Online chatrooms are represented by surreal physical room where the characters physically sit and talk with each other. When the chatrooms are seen from the outside, however, it is clear that they are regular text-based chatrooms (with some twodimensional graphical decorations), not a threedimensional cyberspace. The real-live versions of the characters are seen chatting on regular laptops and iPhones.