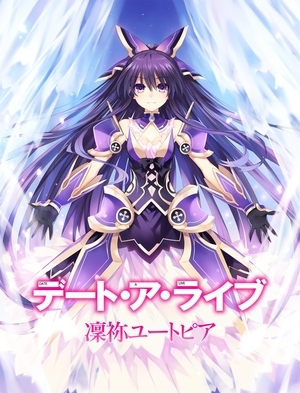 Shido finds Tohka on the school rooftop, in her Astral Dress, wielding Sandalphon and losing control of her power. He refuses to heed her warning to run away, and she completely loses control of her power and an explosion occurs. When Shido comes to, he learns that Yoshino's power also went out of control at around the same time as Tohka's did. He later learns that the seals to keep the powers of the Spirits he's sealed in check has weakened, causing the powers to backflow to them without their knowledge and making them lose control of their powers.

When Shido leaves the house next morning after breakfast, he notices two things he's never seen before: a large tower under construction (which Kotori explains will be Tenguu City's new symbol: Shintenguu Tower), and a girl who knows who he is but he doesn't know her. The other girls however know who she is, and call her Rinne...

Date A Live: Rinne Utopia (デート・ア・ライブ 凜祢ユートピア) is a Visual Novel set right after the events of Volume 4 (and before Volume 5) of the Light Novel of Date A Live, and after Season 1 of the anime adaptation. The game introduces an original character, Rinne Sonogami, in addition to the cast in the anime note sans a still-hospitalised Mana Takamiya. The aim is to date the Spirits to keep their Power Incontinence in check... or so Kotori says, but ultimately you have to eventually choose one girl (and Spirits aren't your only choice; there's Origami too).