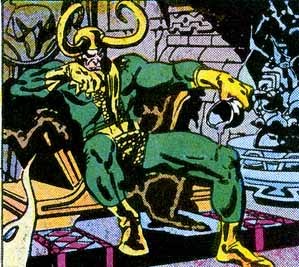 "Why do people always presume I'm lying?"
"I desired the chest for my own use, Thor. Still, if I was able to sow doubt and unrest amongst thy subjects, the day was a good one for Loki, the Trickster!"
— Loki
Advertisement:

Welcome, Midgardian, or whichever other insignificant being you might be. (The Internet's becoming quite popular, after all.)

BEHOLD the majesty of Loki Laufeyson, Prince of Asgard and Jotunheim, God of Mischief and Evil or maybe Lies or... well, we wouldn't want to spoil the surprise would we? The universe's rightful king and Arch-Enemy of The Mighty Thor, your hero and my dear, weak, softhearted sibling.

I was born of Laufey, King of the Frost Giants, in an age long since past, but of course, my true beginnings lie with a man with a typewriter, and his partner, who brought me, my world, and the rest of the cosmos into existence in 1960s, the so-called Silver Age. Rest assured, mortal, I know the truth of my reality, and I can even claim credit for sharing it with a well-known other and destroying his already fragile grasp on our fake reality. Readers were introduced to me in "Journey into Mystery" vol. 1 #85 (October, 1962)

Laufey was a brute of a father, ashamed as he was of my comparatively non-giant size, but as luck—and mine own hand—would have it, Laufey would be slain in battle with the All-Father Odin, Lord of Asgard, and thanks to his love and pity I was taken from Jottunheim and raised as his own son as an Aesir, the giant who became a god, alongside his bloodson Thor.

But as Thor and I aged so did my happiness fade. The Asgardians—a race of proud warrior deities, loved Thor for his courage, his might, his reckless buffoonery, whilst my talents lay in cunning and sorcery.

And like a true brother, I came to detest him.

I arranged for Thor to be exiled to your puny world of Midgard in mortal form, and plotted his death, unleashing scores of monsters and mayhem upon your world in pursuit of that goal, whilst in Asgard I schemed to realize my destiny and take my rightful place on the Allfathers' throne. My plots against Thor were thwarted time and again, and when I pitted him against The Incredible Hulk I made new mortal enemies when Earth's Mightiest Heroes united for the first time, in opposition of me.

But Loki cannot be humbled. I bartered with other mortals and gave them power to fight this new team; I schemed with other villains — for what am I if not a villain? — and sought to defeat Thor and his allies with their aid; and I worked, tirelessly still, to one day claim Odin's crown which looks so much better on my noble head than it does my feeble brother's.

And after decades and centuries of planning and plots, I finally achieved my goal — and for my troubles, Thor brought about Ragnarok.

I did not seek the destruction of Asgard; I have never sought something so terrible, but Thor's actions freed us from the tyranny of the Shadow gods, and we were reborn.

I returned as a woman, but regained my masculinity in short order, and once again worked for the good of Asgard... and the defeat of Thor. But I paid a heavy price for my actions and I died once again, only to rise once more this time as a child — innocent, trusting, but still wily as Mischief must be.

Unfortunately — or fortunately, one supposes, depending upon how you choose to look at it, I managed to rather... sunder myself in the process. Or rather, the old me did. You see, I'm not the Loki I once was — literally. The child-Loki was a copy, but I — the one destined to guide him and then take over his body after he had earned back the love and trust of my dear idiot of a brother am not the one who made the copy. I'm a bit of a copy myself now, actually — seems my skill at mischief is great enough that I was able to successfully Loki ''myself''. And sure, while I did end up nearly causing the meltdown of reality as we know it during my stint with those inperturbable Young Avengers, I discovered my heart just wasn't in it anymore.

I have become more... appreciative, of Thor my brother, for at least he, alone among the Aesir, treats me with trust and love. I now put my mind towards more... benevolent ends, and have assisted Thor and his friends in their hours of need — even if I am still more savvy about how their principles sometimes get in the way of their own good. And still I work for the good of Asgard, the only true home I have ever known, and in the All-Mother's secret service. After all, sometimes it takes a little bad to do good... For my misfortune getting away with... from a past (and future) like mine proved harder than originally anticipated but I can safely say I face the Secret Wars as a changed person.

A series of films tells the tales of Thor and me, as well as his allies. The lofty task of portraying my glorious likeness was given to one Tom Hiddleston. One cannot imagine how delighted I was to see that he performed his role masterfully. The fact that he has also caught the desires of many a mortal woman as myself is an especially delicious triumph over my half-brother. And if not for that green beast of few words, the outcome of the second film would have been far more enjoyable... At any rate, I also appear in the sequel, where I'm up to my old tricks again which has a most satisfying ending where I now sit on the throne of Asgard. And such an handsome man he is too — so much that I modeled my new face

◊ on his portrayal. Life imitating art and whatnot. (Or is it art imitating art)? I would presume that the majority of you newer fans are reading my page in his alluring voice at this very moment. (Or the voice that belongs to Graham McTavish, for those of you who are more animation-inclined and familiar with me as well as my exploits. Or José Gilberto Vilchis, who masterfully translated Hiddleston's performance into the Latin Spanish dialect.) The other movies, better not talk about them. Not so much for Thor removing me from the throne, Odin's first born Hela beating us two with no effort, and "get help", but because of Thanos snapping my neck. Though not even death stops me — the Avengers returned to when they defeated me and allowed me to escape! This gave Hiddleston a whole series to depict my glory on Disney+ online streaming — in spite of pestilence setbacks — and the show even brought in more Lokis, including a woman and an alligator!

For some of my other exploits can be found here, here and here.

Anyway, Midgardian, I guess that I have shown you everything about me. With that in mind, kne—
"LOKI!!! This is a free page!"
Errr... brother issues. Thor's not happy about website domination...errr...I'll try to calm him down and hope he doesn't bring that green brute along with him... I'll be back!