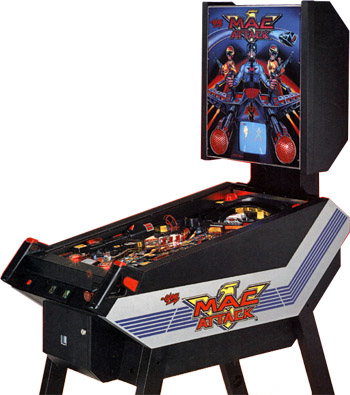 Mac Attack is a Physical Pinball Table designed and illustrated by Tony Ramunni, with music and software by Alberto Frabetti. It was released by Italian Pinball maker Zaccaria (operating as "Mr. Game") in 1989.

As with their other releases at the time, Mac Attack was part of an attempt by Zaccaria to turn their fortunes around with distinctively bold games — in addition to conventional pinball controls, the slanted futuristic cabinet featured two grip handles with firing buttons, a vacuum-formed playfield filled with details, and a 9" color CRT in the backbox. The game itself hints at a Summer Blockbuster plot, as a team of three commandos use Jet Packs, a rocket-powered tank, and their Attack Base full of guns to blast their enemies. Run up the Take Off Ramp to fly into action, fire the two pinball-launching guns at the enemy base, get the Mac Mobile into position, then play through the three Video Modes to qualify for a Special.

Needless to say, Mac Attack is a very hard table to find today, due to both Mr. Game's shrinking fortunes and the machine's unwieldy nature; the cabinets were extremely heavy and hard to move, the legs required a special set of straight threaded pipes for attachment, and there was no provision for rewiring the game for 110 volts, further limiting its reach outside of Italy.