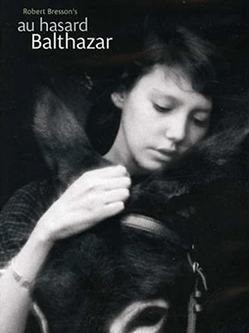 "Everyone who sees this film will be absolutely astonished (...) because this film is really the world in an hour and a half."
— Jean-Luc Godard
Advertisement:

Au Hasard Balthazar ("Balthazar, at Random") is a 1966 film directed by Robert Bresson. The film follows a donkey named Balthazar from birth to death. Balthazar starts off enjoying an idyllic childhood belonging to a farmer and his daughter, but, over the years, he passes from owner to owner, experiencing cruelty and abuse.

The film is probably Bresson's most famous and was voted the 16th greatest film of all time in the 2012 Sight and Sound Poll. Many critics regard it as the greatest film to feature an animal as the main character.