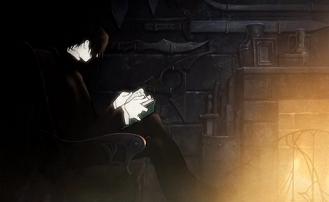 "What you saw at the castle on that windy night... and what you saw at the bridge last night... how I smiled... never utter a word to anyone. If you dare speak of it, I will find you wherever you are hiding, and I will kill you. I will rip you apart. I will shatter your bones. I will eat your flesh. I will drink your blood dry. And I will devour you."
— Opening lines
Advertisement:

Kigeki (meaning Comedy) is an Anime short film by Studio 4°C, released in 2002 as one of five other Sweat Punch shorts, that were collected in the anthology Deep Imagination.

Set during the Irish War of Independence

, Kigeki tells the story of a little girl who goes to seek out the Devil's Castle, home of a mysterious Black Swordsman, with whom she needs to strike a deal in order to save her family from the advancing English army. The Black Swordsman is a dark, reclusive individual, and a highly skilled warrior, who will only accept advance payments in the form of books. However, not just any old book will do...

Kigeki is a beautiful, Gothic fairytale steeped in symbolism and rich in visuals, animation, atmosphere, and music. Clocking in at only 10 minutes, it manages to tell the engrossing story of a young girl's salvation more effectively than most full-length anime series. It is accompanied by two pieces by composer Franz Schubert, the "Ave Maria" and "Erlkönig".