Film / Gandhi at the Bat 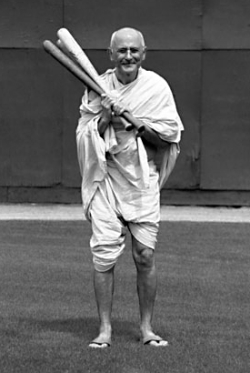 Gandhi At The Bat

Simply put, in 1933, Mahatma Gandhi makes a secret goodwill trip to New York City, and visits Yankee Stadium during his stay. Charmed by the game of baseball, Gandhi asks if he can try the sport out. With no objections from the managers or home plate umpire, he steps in as a Yankee pinch hitter in the bottom of the ninth. Hilarity Ensues.

The film is presented as a recently-discovered "lost" newsreel that was supposedly suppressed by Franklin D. Roosevelt, who didn't want to start an international incident. In reality, the film is based off of a 1983 The New Yorker short story by Chet Williamson.

Gandhi At The Bat was so well-received at a National Baseball Hall of Fame film festival that the organizers invented a new award category just so they could give the filmmakers a trophy.

Gandhi At The Bat provides examples of: