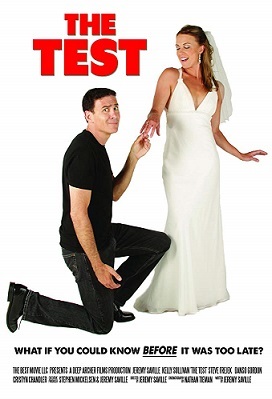 The Test is a 2012 Romantic Comedy independent film, written and directed by Jeremy Saville.
Advertisement:

Nathan (also Saville) apparently has it all: A good, well-paying job, a close circle of friends and a is set to marry Julia (Kelly Sullivan), his beautiful fiance, who's head-over-heels in love with him. However, doubt sets in when he begins to suspect Julia may actually be marrying him only to spend his money. So at the suggestion of his buddies he decides to put Julia through a series of Secret Test of Character to prove that she truly loves him.

The Test provides example of: