Literature / Tales of the South Pacific 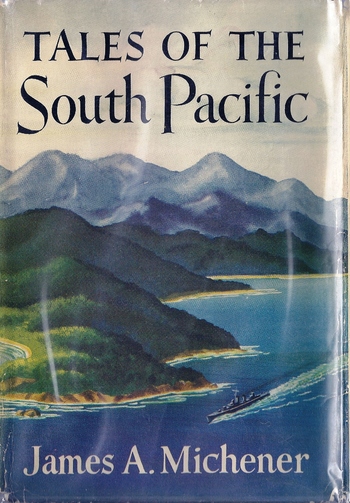 I wish I could tell you about the South Pacific. The way it actually was. The endless ocean. The infinite specks of coral we called islands. Coconut palms nodding gracefully towards the ocean. Reefs upon which waves broke into spray, and inner lagoons, lovely beyond description. I wish I could tell you about the sweating jungle, the full moon rising behind the volcanoes, and the waiting. The waiting. The timeless, repetitive waiting.
But whenever I start to talk about the South Pacific, people intervene.
Advertisement:

Tales of the South Pacific is a 1947 short story collection and the first published work of fiction by James A. Michener.

The setting is Des Moines, Iowa—no, just kidding, the South Pacific, namely the area around the Cook Islands and the Solomon Islands, in the years 1942-1944 during World War II. The nineteen stories in the collection are narrated by an unnamed "Commander" who is an avatar for James Michener, who served in Real Life as a U.S. Navy Lieutenant Commander in the New Hebrides

islands. The stories are loosely connected, with several characters appearing in more than one, and also by a plot thread about American plans for a fictional "Operation Alligator" against the Japanese. The emphasis is on the long, long periods of boredom between the occasional bloody assault, and how the Americans in the south Pacific interact with the natives, other locals, and each other.

This story collection is largely forgotten in latter days, but two of the stories therein, "Fo' Dolla'" and "Our Heroine", were adapted into the much better-remembered musical South Pacific.