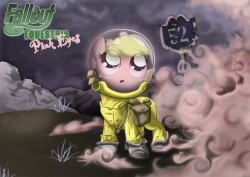 The Ghost of the Long 52, in all her adorable glory.
"Well, not just that... it's something like... when you think about a cute thing and you want to have it there so you can stay with her some more and there are lots and lots of thing that make you think about her, even silly things like a color or some words and... ah..."
—Puppy on what cute means to her
Advertisement:

is a completed fanfic by Mimezinga. Though based on the Fallout: Equestria lore, it breaks off from the rest of the other Recursive Fanfics in having its own distinct style, setting, and characters. Upon its finish, it had achieved 134,575 words total, while being the shortest one of the more popular spin-offs.

This is the tale of Puppysmiles, a cute, vivacious filly who lives with her mother in a terrace just beside Canterlot. Or, that is, she did before she took a nap in the kitchen and woke up to find her house completely collapsed and her neighborhood destroyed. Uh-oh. Though, none of that is more important that the whereabouts of her mother—one Rainy Days—who'll definitely know how to fix everything. Moms are cool like that. Only problem is that she's not currently with Puppy. In fact, Puppy has no idea where she could possibly be!

Unbeknownst to her, Puppy had been asleep no shorter than two-hundred years, after all the pretty fireworks had fallen over the city, leaving Canterlot enveloped in pink cloud. Just like in its predecessor, the place is inhabited by vicious feral ghouls and other horse tile entities, but Puppy had managed to stay safe and sealed underneath the rubble of her home for the last two centuries while a Mark VI life support suit kept her in a state of preservation. Now that she's woken up, it's time for action, and it looks like the strange Mr. Voice who lives inside the suit knows exactly where MoM is! Fun times and adventure ensues for the daring, the bold, Space Captain Andromeda!