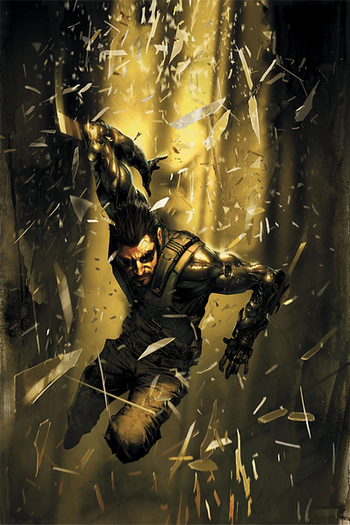 The Deus Ex: Human Revolution comics are a series of mature graphic novels, composed of a total of six issues, created in conjunction with DC Comics and written by Robbie Morrison. They are a part of the Deus Ex Universe. The principal drawing artists are Trevor Hairsine and Sergio Sandoval, the cover artist is Jim Murray, the editing artists are Ben Abernathy and Kristy Quinn, the color artist is Jorge Gonzalez, and the letters artist is Saida Temofonte.
Advertisement:

The series tells a side-story of Deus Ex: Human Revolution, retaining the protagonist Adam Jensen, and taking place right after the fight with the notorious antagonist Lawrence Barrett. The comics expand on many aspects of the storyline, primarily Jensen's past as a SWAT team member and its connections to his present life. It makes for an interesting segue in the Human Revolution story, featuring many familiar faces such as David Sarif, Francis Pritchard, Dr. Marcovic, and Faridah Malik, along with a few new in-depth individuals.