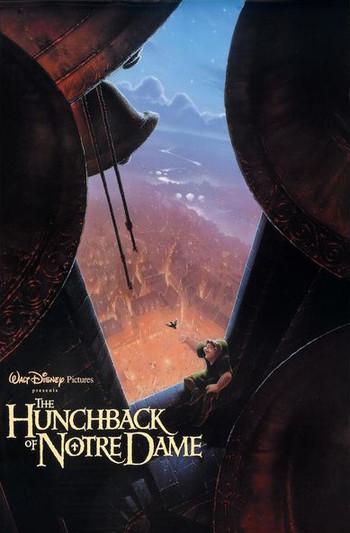 ♪ Morning in Paris, the city awakes
to the bells of Notre Dame... ♫
"Up there, high, high in the dark belltower, lives the mysterious bellringer. Who is this creature?note Who? What is he?note What? How did he come to be there?note How? Hush,note Owww… and Clopin will tell you. It is a tale, a tale of a man... and a monster..."
— Clopin, opening narration during "The Bells of Notre Dame"

The Hunchback of Notre Dame is the 34th entry in the Disney Animated Canon, released in 1996. It's inspired by Victor Hugo's novel of the same name, but has more in common with the 1939 film. The film is known for being one of the Darker and Edgier Disney animated films, although still being considered family-friendly.

In 15th century France, the corrupt and sinister Judge Claude Frollo once uncovered several Roma trying to enter Paris with an unidentified and bundled object. One of them attempted to escape with it and Frollo ran her down, indirectly causing her death. It is then that Frollo realized that the woman was carrying a baby, and, disgusted by the infant's deformity, nearly drowned the child in a well when he is stopped by the Archdeacon. He warned Frollo that his sin of spilling innocent blood must be atoned for and has Frollo care for the child as his own. Frollo reluctantly agrees to do so, with the stipulation that the child - whom he names Quasimodo (meaning "half-formed") — reside in the bell tower of the cathedral, never to be seen by public eyes.

Twenty years pass, and the kindhearted but isolated Quasimodo strongly desires to have one day of freedom beyond the walls of Notre Dame to see the Feast of Fools festival and decides to act on his decision after receiving encouragement from his animate stone gargoyle friends Victor, Hugo, and Laverne. However, when Quasimodo's identity is revealed, he is publicly scorned and humiliated by the townspeople until he is rescued by the beautiful and strong-willed Romani Esmeralda, who has no tolerance for Frollo's ill-treatment of Quasimodo and her people. This encounter results in an unlikely friendship between Quasimodo and Esmeralda (as well as a one-sided love from Quasimodo to Esmeralda) and an unsettling lust in Frollo, whose inner conflict over his piety to God versus his growing sexual lust for Esmeralda drives him to hunt the Romani girl down with the intention of having her for himself or not letting anyone have her at all. With Esmeralda and the other Romas's lives in danger, and the whole city of Paris in the grip of Frollo's corruption, Quasimodo must team up with Esmeralda's love interest Captain Phoebus in order to stop Frollo and rescue Esmeralda.

In 1999, the film was translated into German for a stage musical, Der Glöckner von Notre Dame. A second, English-language stage adaptation of the film, with a book by Peter Parnell rather than the one James Lapine wrote for the German production, debuted at San Diego's La Jolla Playhouse in 2014. This was restaged at New Jersey's Paper Mill Playhouse the following year, though plans for a Broadway transfer were cancelled (although a cast recording has been made.) In 2017 Peter Parnell's version was translated into German and was brought to Berlin, before going on tour. Both musicals backtracked from Disney's take towards the original novel, and are thus Darker and Edgier, Parnell's version more so than Lapine's. Tropes for these stage productions can be found here.

In 2002, a Direct to Video sequel was made. For tropes relating to it, here.

Consider It My Highest Honor.

In Judge Frollos search for Esmeralda, it takes him to a windmill owned and operated by a family that was innocent. Judge Frollo orders for Phoebus to burn the windmill to the ground with the family trapped inside, only for him to refuse. Then when Frollo burned the mill himself, Phoebus leaps inside to free the family and get them to safety.

Consider It My Highest Honor.

In Judge Frollos search for Esmeralda, it takes him to a windmill owned and operated by a family that was innocent. Judge Frollo orders for Phoebus to burn the windmill to the ground with the family trapped inside, only for him to refuse. Then when Frollo burned the mill himself, Phoebus leaps inside to free the family and get them to safety.