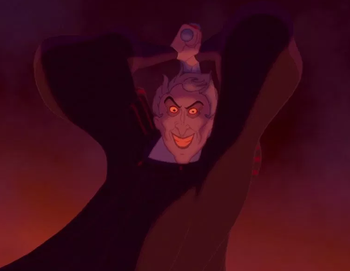 "And He shall smite the wicked, and plunge them into the fiery pit!"note Oh, He does. He certainly does...

The Disney adaptation of Victor Hugo's classic novel (which is hardly light reading in itself) is one of the darkest films ever produced by the studio, featuring adult content like infanticide, the outright racist treatment of the Roma people, the abuse of religious power and creepy lust displayed by one of the most vile and frighteningly realistic villains in the history of animated films, and on-screen deaths for heroes and villains alike. As a result, it has more than enough frightening moments and concepts to go around for the whole family. With all of this and the heavy adult themes present in the picture, it's startling to realize that the film somehow got a G rating from the MPAA...