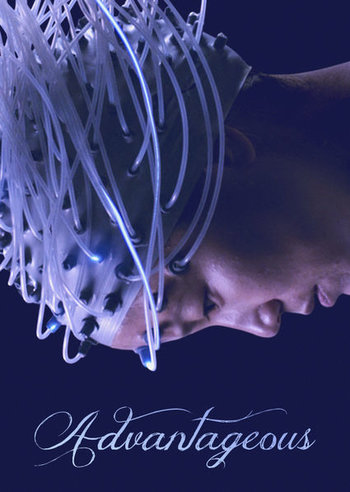 Advantageous is a 2015 science-fiction film directed by Jennifer Phang, released exclusively to Netflix on June 23, 2015. It stars Jacqueline Kim as Gwen and Samantha Kim (no relation) as her daughter, Jules, with supporting characters played by James Urbaniak, Freya Adams, Ken Jeong and Jennifer Ehle.

In the not-too-distant future, Gwen Koh is a single mother working as a spokeswoman for the biotech firm Center for Advanced Health and Living, while trying to get her daughter into a good school. At the same time, unemployment is at catastrophic levels, and companies are not interested in hiring middle-aged women.

To hold onto her job, Gwen will have to submit herself to a drastic procedure. However, it requires the ultimate sacrifice...

The film Advantageous provides examples of the following tropes: