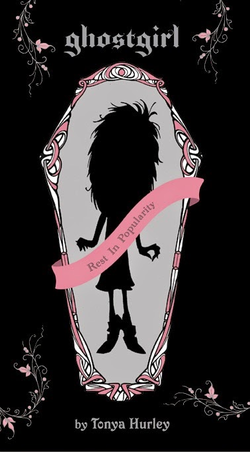 "Rest In Popularity"
Now I lay me down to sleep;
I pray the Lord my soul to keep.
And if I should die before I awake,
I pray the popular attend my wake.

ghostgirl note (that is the correct capitalization) is a book series written by Tonya Hurley. The first book in the series, simply titled ghostgirl, was published in 2008. It was followed by two sequels, ghostgirl: Homecoming and ghostgirl: Lovesick.

The series is about an ignored girl named Charlotte Usher who's starting her final year at Hawthorne High. Trying to get noticed by her peers, especially by her crush Damen Dylan, Charlotte starts this year off on the other foot. While trying to be Damen's lab partner in Physics class, Charlotte accidentally chokes on a gummy bear and dies. After dying, she is required to attend an alternative high school for dead kids called Dead Ed. She later finds out that no one is able to see her except her idol's sister, Scarlet. While using the Possession incantation she learned, Charlotte begins to use Scarlet as a way to communicate with Damen, but Damen thinks he's talking to Scarlet and falls in love with her.