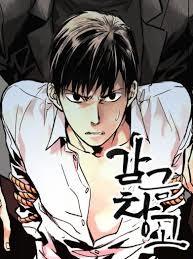 Warehouse is a Korean web comic (Manhwa) by Author Killer Whale published by lezhin. There is currently no official English translation for this series.

Kim Dohyun, 28, is stuck in an dead-end job and with almost no money to his name. When he suddenly gets kidnapped during the day, it's only the beginning of his confinement by a scar faced man, who seems to have some kind of perplexing motive for keeping him captive.

Warehouse is ongoing at 62 chapters.