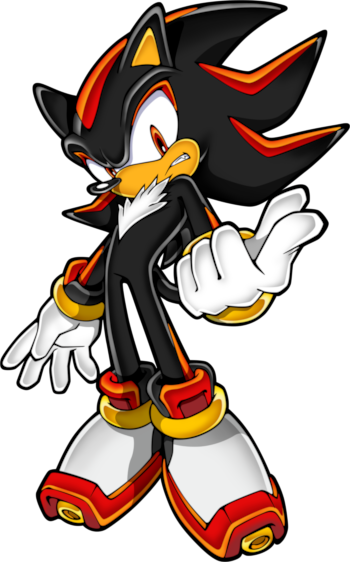 "If the world chooses to become my enemy, I will fight like I always have."

An artificially created hedgehog made by the late professor Gerald Robotnik. 50 years before the start of the series, Gerald made a deal with an alien named Black Doom that he'd create the ultimate weapon for Doom in exchange for his immortal blood to cure his ailing granddaughter, Maria. G.U.N. caught wind of Project Shadow and had the entire project shut down - but not before the project in question could come to fruition. They stormed the ARK and Shadow was sealed away until Dr. Eggman released him during the events of Sonic Adventure 2. Over the course of the game, Shadow reveals he was carrying out Gerald's will and worked to destroy the planet as revenge for Maria's death. However, Amy manages to convince Shadow to help, and he remembers Maria's wish to protect humanity. He and Sonic team up to destroy his own prototype, and he apparently dies in the effort.

Later it is revealed that you can't assume you killed the Ultimate Lifeform just because you saw him burning up through the atmosphere, and he returns with a case of amnesia and a distinct uncertainty as to whether he's a robot or a clone, eventually going on to confront his genetic donor Black Doom and save the planet.

Shadow is a very straightforward individual; he's aloof, taciturn, and ambitious. Because of his attitude, he is extremely hard to get along with and has a very independent nature, preferring to work on his own more often than not. While he's often ruthless and extremely pragmatic, he can show both empathy and compassion when the situation calls for it. He prefers a straightforwards, rather blunt approach to problems, and tends to handle situations in a fist-to-face, foot-to-groin, head-to-knee kind of way, regardless if those are his orders or not.

Mephiles destroys the Scepter of Darkness, and surrounds Team Dark with an army of clones of himself, intent on killing Shadow for refusing to join him. This does not intimidate Shadow, who only responds by taking off his power-inhibiting bracelets and fearlessly takes on his army.

Mephiles destroys the Scepter of Darkness, and surrounds Team Dark with an army of clones of himself, intent on killing Shadow for refusing to join him. This does not intimidate Shadow, who only responds by taking off his power-inhibiting bracelets and fearlessly takes on his army.