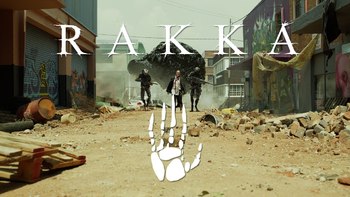 "They came here to exterminate us".
"I wonder if deep down, each person knows we're already dead. I wonder if only one, sick primordial instinct keeps marching us forward aimlessly. Every rational thought tells us it's over. Every vile, deceptive, chemical, emotion tells us it isn't."
Advertisement:

Rakka is a 2017 short film from Oats Studios. In the near future, a race of reptile-like aliens have invaded Earth, killing or enslaving most of humanity. What remains of the human population is engaged in a guerilla war against the invaders, taking what small victories they can and just trying to survive.

"Please tell me; what futures do you see?"