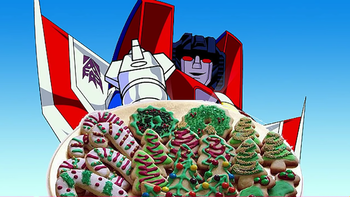 Starscream cookies, more than meets the icing!
Transformers, due to its long history and multiple continuities, has spawned a host of memes. Please separate them not just by type of media, but series it was based on. Fandom and wiki memes can be separate.
Advertisement:

When adding examples, use the following format:

If you don't bother explaining your example, it will be deleted.