Trope Co / Fade Around the Eyes 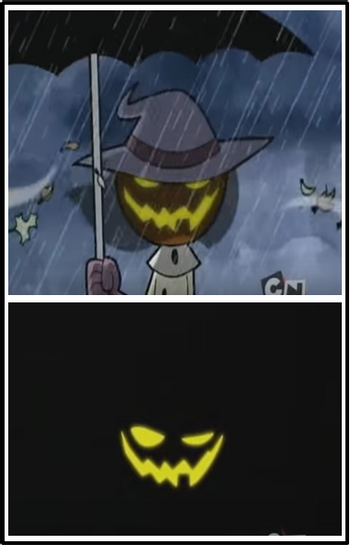 Another satisfied - and sinister - customer!
Advertisement:

Have you ever done a really great Evil Laugh or finished an epic Villain Song, then stood there in awkward silence? Wish there was a dramatic way to end this Totally Radicalnote We at Trope Co.® know how to connect with our younger audience! scene? Well, wish no longer, 'cause your dream is now a reality!

Introducing Fade Around the Eyes™, Trope Co.®'s all-new specialized lightbulb brand! When you're finished being awesome, Fade By The Lights™ will provide an incredible spectacle for anyone watching: They won't believe their eyes as the entire room fades to black around yours!

Here's how it works: The Fade Around The Eyes™ lightbulb is equipped with special sound-activated technology that can be programmed to recognize your eyes, or anything else you want it to! (Teeth are also commonly used.) When it detects a certain trigger, say, the end of a Villain Song, the lightbulb slowly goes out and sends out some Applied Phlebotinum to keep your eyes lit up! The eyes or other features used will then fade away as well, plunging the room into total darkness, after which the lightbulb turns right back on, so you can get back to what you were doing before.

Fade Around The Eyes™: the perfect way to darken your day!