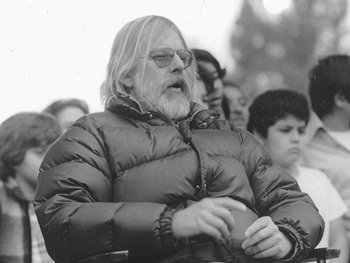 "You must understand if somebody says me, then they are automatically saying the film, for we are one and the same."
Advertisement:

Born and raised in Ogden, Utah, he moved to California in 1949, fed up with the harsh winter weather and drudgery of working on a railroad construction crew in Wyoming. Taking a job in the printing department at Universal, he slowly moved up the Hollywood ladder to become a film editor. After editing several films for director Norman Jewison, including In the Heat of the Night (for which he won an Academy Award) and The Thomas Crown Affair (1968), Ashby moved into directing with 1970's The Landlord (produced by Jewison). A disappointment at the box office, The Landlord still garnered some good reviews, citing Ashby as a talent to watch, and even received an Oscar nomination (Lee Grant for Best Supporting Actress).

His next film, Harold and Maude, recovered from a poor initial reception to become one the most famous and beloved Cult Classics of all time. After that Ashby swiftly became an A-list director, working with the likes of Jack Nicholson, Warren Beatty, Jane Fonda and Peter Sellers. His films garnered near-universal acclaim, did well at the box office, and won multiple Oscars.

After this incredible run in The '70s, Ashby's career collapsed once The '80s rolled around. Frequent battles over Executive Meddling and rumors of excessive drug usenote his biographer Nick Dawson agrees that Ashby had a fondness for recreational drugs but feels that the extent of his use was exaggerated to fit the image of an out-of-control eccentric by people who didn't like him. made it hard for him to find employment. After directing a few little-noticed big screen films and doing some television work, he decided to clean up his life and make an attempt at a comeback. Unfortunately, by that time he had developed colon cancer and would soon pass away at the age of 59.

While his films continued to remain popular, by the time of his death Ashby himself had been reduced to a footnote in film history. But with the re-evaluation of New Hollywood in The '90s, Ashby came to be appreciated as a symbol of the creative innovation and quality of that era of filmmaking, as well as a sad cautionary tale of the excesses that went along with it. His filmmaking has been Vindicated by History, and many modern directors (most notably Wes Anderson) have been influenced by his work.

He was married five times, but had no children.

Hal Ashby films with their own trope pages include: