Film / A Zed and Two Noughts 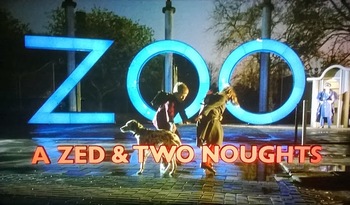 A Zed and Two Noughts is a 1985 film directed by Peter Greenaway.

"A Zed and Two Noughts" turns out to be a British way to spell "zoo". A woman named Alba Berwick is driving outside a zoo when a swan which apparently escaped from the zoo smashes into her windshield. Alba's two passengers, two women in the backseat, are killed; Alba winds up losing a leg.

It turns out that the women in the back seat are the wives of two brothers, Oswald and Oliver Deuce (Real Life brothers Brian and Eric Deacon). Both brothers, unable to deal with the deaths of their wives, become obsessed with death and decay. They begin taking the corpses of animals from the zoo and photographing the corpses as they rot. They both become fixated on Alba, and she has sexual relations with each. The brothers begin to draw unnaturally close to each other, dressing identically, as together they fall into their obsessions.

There's also a doctor at the zoo, with a fetish for amputations, and a hooker at the zoo named "Venus de Milo"...it's quite a Mind Screw of a movie.