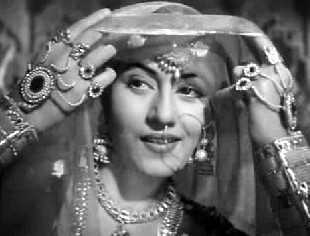 The movie is based loosely on real events and a legend. Anarkali, a tawaif and a dancer falls in love with Crown Prince Salim (who would later go on to become Emperor Jahangir). Salim's father, the Emperor Akbar objects because of Anarkali's low social position. Emperor Akbar orders her imprisonment. Salim rebels against his father and orders an army to launch a siege. He gets defeated easily. Anarkali, to spare the life of Salim, asks Emperor Akbar to take her life instead. He orders publicly for her to be buried alive in a wall though he spares her in private. Salim unaware is distraught. He then falls in love with Bahaar, a courtesan jealous of Anarkali, and he is unaware that Anarkali is still alive. For Bollywood fans, the film has the quintessential Star-Crossed Lovers.