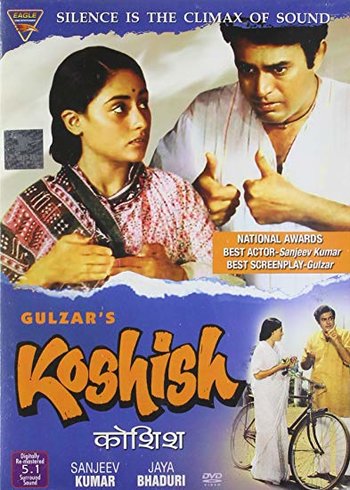 Koshish (meaning something like "The Attempt", "The Effort", "The Struggle"), is the story of a deaf and mute woman Aarti (Jaya Bhaduri, later Jaya Bachchan, wife of Amitabh Bachchan and mother of Abhishek Bachchan) who meets for a deaf and mute man Hari (Sanjeev Kumar).

Both working class people with few resources, they go to a school for disabled people together, walk along the beach, befriend a blind man, fall in love, place prank calls, get married, have a nondisabled child, lose the child under horrifically sad circumstances, have another nondisabled child, become more middle class with the help of Hari's kindly and broad-minded boss, and live to a ripe old age together, communicating all the while without spoken words. (They use sign language, and it helps that both the leads have highly expressive eyes and body language).

There are several decent songs (not performed by the romantic leads, obviously), but the real draw is the sweet and understated romance between the two leads, and the director's skill in making the story accessible even to people who don't know sign language well enough to follow the signed conversations.