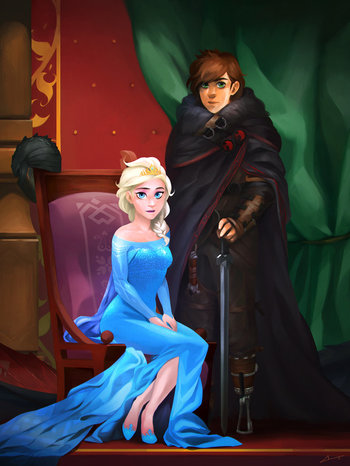 Royal Portrait of High King Hiccup of the United Norse Kingdom and Queen Elsa I of the Kingdom of Arendelle note  Cover Art, created by Charles Tan

, is a crossover fanfic between How to Train Your Dragon and Frozen.

In their time, political marriages are a fact of life. Elsa's heart is thawed and expanding; Hiccup's is broken and receding. Theirs is a shared life of dragons, talking snowmen, parchment, ink, flames, ice, steel, and blood. Through all this, love may yet be found.

Acting as a Continuation of How to Train Your Dragon 2 and Frozen, the fanfic deals with the aftermath of Drago's defeat on Berk. The ensuing battle with the rest of Drago's army escalated into a war that saw the Viking tribes uniting into a kingdom with Hiccup as their king. But tragedy continues to strike as Astrid dies and Hiccup is forced to carry the burden of leading alone.

Meanwhile, in Arendelle, Elsa's world is turned upside down when she learns of the Vikings' return. Fearful for her loved ones, Elsa scrambles to ready Arendelle for the first war its seen in centuries.

Of State provides examples of: