The first villainous team in the series, and the villainous team of Red and Blue and Gold and Silver, and their respective remakes. A cruel team of criminals that capture and steal rare or strong Pokémon to sell them, but also perform experiments on them, all to Take Over the World. They are led by Giovanni, who's also the Gym Leader of Viridian City, but stopped running his Gym in favor of leading Team Rocket. Their hideout is located underneath the Celadon City Game Corner.

After Giovanni's final defeat at the hands of Red, the team is officially disbanded and lays low for three years, but some remaining members plan on rebuilding the team in Johto. They take over the Goldenrod Radio Tower to broadcast a message to their boss, but Ethan/Lyra nips their threat in the bud, preventing the team from reforming.

Roughly a decade after their downfall (in-universe and out), Team Rocket (now rebranded Team Rainbow Rocket) resurfaces in Alola and invades the Aether Paradise to obtain their Ultra Wormhole technology, intending to Take Over the World with the help of other team leaders: Maxie from Team Magma, Archie from Team Aqua, Cyrus from Team Galactic, Ghetsis from Team Plasma, and Lysandre from Team Flare. 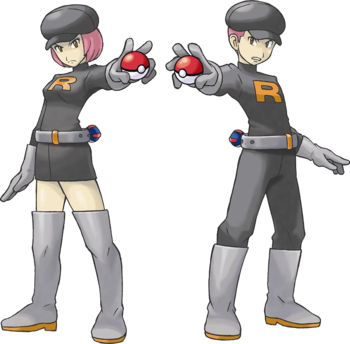 The Viridian Gym Leader — The Self-Proclaimed Strongest Trainernote He has no official Gym Leader title but is called this by the Pokémon World Tournament announcer. 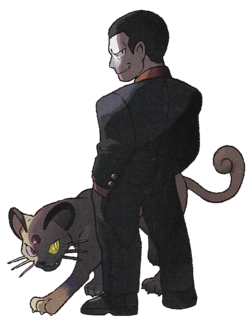 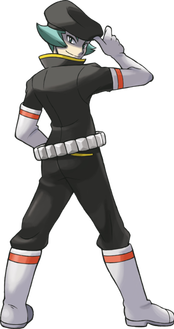 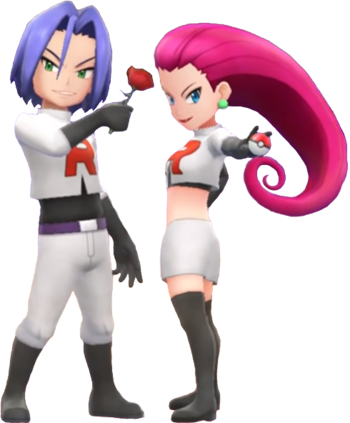 Jessie and James in Pokémon Let's Go, Pikachu! and Let's Go, Eevee!
A recurring duo of Team Rocket members made distinct by their unique designs and white uniforms, plus a Meowth to make them the iconic Terrible Trio. They appear in various locations in the Kanto region, only to be defeated by the player.

Originally debuted in the anime. See the character page for their original incarnations here.