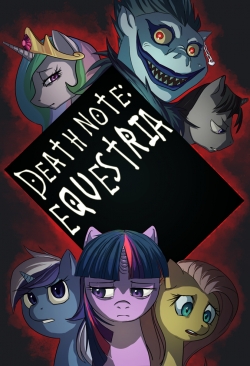 Equestria is growing, and magical savant Twilight Sparkle is disgusted by the crime and corruption this change has brought. Her life is changed forever when she discovers the Death Note, a notebook with inexplicable and deadly powers. She uses this book to pass judgement on those she deems unworthy of life, aiming to create a perfect world free of crime. But when the two Princesses put their best pony on the case, a mysterious detective known only as L, a psychological game of cat and mouse erupts between the two.

A Death Note/My Little Pony: Friendship Is Magic Fusion Fic by Nonagon. It follows the basic plot of Death Note but introduces enough twists to keep the readers on their toes.

. Officially declared a Dead Fic in October 2018, but is currently having its remaining chapters recapped.

Compare with The Dragon's Notebook, the other Death Note/MLP:FIM crossover fic.