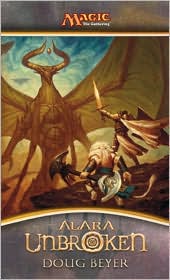 Alara Unbroken is the tie-in novel for Magic: The Gathering's Shards of Alara block. Some of the events in the book overlap with the webcomics Flight Of The White Cat and Honor Bound.

Long ago, the plane of Alara split into five shards, one for each color of mana. Each of the five shards was exceptionally rich in one color of mana, accented by smatterings of that color's allied colors, but completely devoid of its enemy colors. Alara Unbroken visits the plane of Alara at the time of the Conflux, when its five shards have started to reconverge, guided by a mysterious, nefarious force. (Hint: it's Nicol Bolas.) The protagonists are a young Ajani Goldmane, who has just discovered his planeswalking abilities and is on the hunt for his brother's killer; Elspeth Tirel, a planeswalker and knight of the shard of Bant, who struggles to come to terms with what she sees as the corruption of a paradise; Rafiq of the Many, a champion of Bant investigating said corruption; and Sarkhan Vol, a dragon-mage planeswalker who discovers in Nicol Bolas a dragon truly worthy of his worship.