Tropes specifically applying to Thrawn based on his appearance in Star Wars Legends can be found here. 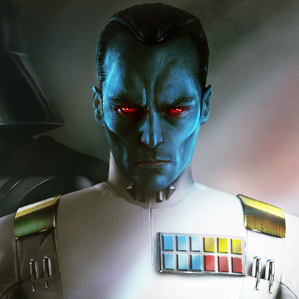 "I study the art of war, and I work to perfect it."

Voiced by: Lars Mikkelsen
Appearances: Chaos Rising | Greater Good | Lesser Evil | Thrawn | Thrawn: Alliances | Thrawn: Treason | Rebels | The Mandaloriannote Mentioned only
"To defeat an enemy, you must know them. Not simply their battle tactics, but their history, philosophy, art."
Advertisement:

A Chiss military agent discreetly dispatched to the Empire under the guise of exile in an attempt to secure a military alliance against a warmongering race known as the Grisk. To this end, he joined the Imperial Navy, rapidly rising the ranks and eventually becoming a Grand Admiral of the Empire. His good fortune would hit a snag, however, when he was tasked with apprehending a rebel cell known as Phoenix Squadron on the eve of the Galactic Civil War.