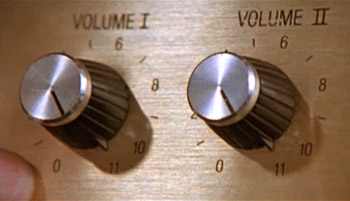 Try to top this.
Nigel Tufnel: What we do is, if we need that extra push over the cliff, you know what we do?
Marty DiBergi: Put [the volume] up to eleven.
Nigel Tufnel: Eleven. Exactly. One louder.
— This is Spın̈al Tap

For those who aren't into electric guitar, "Taking it up to eleven" is a reference to the maximum volume setting on a guitar amplifier. In a nice example of Defictionalization, Marshall came out with an amp that went up to 11, mostly in response to the trope being used in This is Spın̈al Tap. Later, many Marshall amplifiers began to sport 0-20 volume knobs, essentially taking the trope itself Up To Eleven.