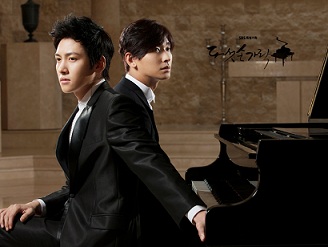 Lonely Rich Kid Yoo In Ha is a Child Prodigy pianist and heir to the piano company, BooSung Instructments. He lives with his senile grandmother, his mother Chae Young Rang, and his father Yoo Man Se. Because he has no worries, In Ha spends most of his time, playing the piano and being a Spoiled Brat. That is, until his father brings home a long lost son, Ji Ho. Ji Ho is older, nicer, and to top it off, he has absolute pitch—a great advantage for anyone who wants to be a pianist. Not only that, Young Rang takes a liking to the new kid, allowing him to call her mother and treating him with deference.

And then a fire engulfs their home, forever changing the lives of the members of the Yoo family.