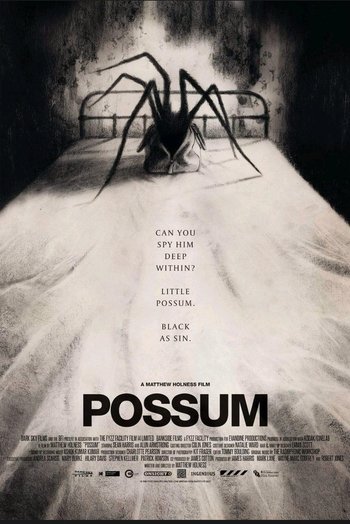 "Bag is open, growing wider
What's inside it, man or spider?"
"Mother, Father, what's afoot?
Only Possum, black as soot.
Mother, Father, where to tread?
Far from Possum, and his head."
Advertisement:

A slow, atmospheric film. Possum tells the story of Phillip (Sean Harris), a disturbed puppeteer haunted by his past, who returns to his childhood home following an apparently disastrous performance (the details of which are never disclosed to the audience). The house has been owned by his crass and unpleasant Uncle Maurice (Alun Armstrong), who essentially raised Phillip after the latter's parents were killed in a fire. Phillip spends much of his time at home trying to rid himself of Possum, a ghastly spider puppet he created that has come to embody all the emotional baggage in his life. Unfortunately, Possum doesn't seem to want to go. And things get worse for Phillip when a local boy goes missing and people begin pointing their fingers in his direction.