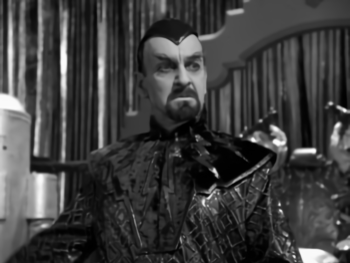 Now here's a fun one.
"And remember...you're the Queen!"
Advertisement:

Aliens from a photonic universe mistake The Adventures of Captain Proton for reality and go to war with Dr Chaotica. Captain Janeway must enter the holodeck program as the sultry Queen Arachnia to put a stop to things. Hilarity Ensues.