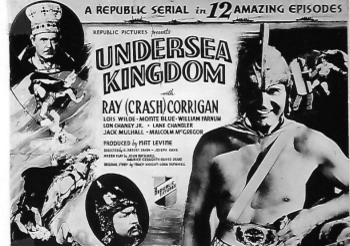 A Republic Film Serial from 1936, in twelve chapters. The plot is basically the classic "Atlantis found" story.
Advertisement:

U.S. Navy Lt. Crash Corrigan, Professor Norton and his son Billy, Joe the panicky sailor, and Intrepid Reporter Diana Compton (and two other guys with a parrot, but they show up so little it doesn't count) journey to Atlantis, a "continent" that is under a dome of a gold/copper alloy at the bottom of the ocean. There they have misadventures trying to prevent the evil Unga Khan from destroying/conquering Atlantis, and eventually the "upper world."

See here and here for episodes of Mystery Science Theater 3000 which featured the first two installments of Undersea Kingdom.