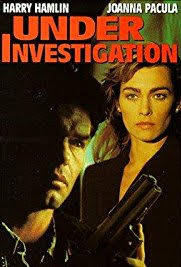 A Direct to Video feature released by New Line Cinema in 1993. Not well known, and those who have seen it tend to think of it as a poor imitation of Basic Instinct. Its selling point is probably the opening murder scene that combines bondage with Fanservice (or Fan Disservice) depending on your perspective.

A woman is found murdered after being tied to the bed of a famous artist. Jaded and washed out detective Harry Keaton is assigned to the case. He soon complicates the case for himself when he becomes romantically involved with one of the prime suspects, the artist's wife.